As I read the previous posts and the responses on my first blogpost I would like to put stereotypes as a topic in the spotlight. Like Nathi said it is very important to identify the stereotpyes.

I point out the German movie 'Paradise : Love ' from Ulrich Seidl. Visually the movie is close to perfection in my eyes. The story is about a 50 year-old woman who goes to Kenya as a sex-tourism. Later it turns out the men want money from her. As I still think I like the movie, as harder I start to think about the topic. 'Heading South' is a comparing movie where three females go to Haiti for casual sex. It is quite shocking that we in the 21 st century still make movies about this. The black men become an object in the movies. They are presented as stereotypes alot of us have. The black men are pictured as the handsome men looking for woman, and the white woman are pictured as the ones with the money who can afford anything. 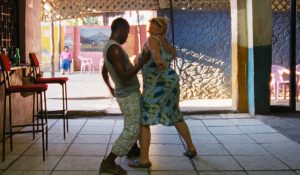 I have no idea if such kind of movies are also made in Asia/ Africa. I think as long as we make such movies or write such texts we keep on seeing those stereotypes, even if they are not even there. By stereotizing (I don't know if that is a word) things we still don't understand the others.

In my own practice I try to investigate where the stereotypes come from and how we see the other way because of those movies/ the media. For a project I went to an African hair saloon to braid my hair, and the people were quite sceptical about me braiding my hair the African way, the first 30 minutes I got completely ignored and looked at weirdly, but after they came to me and gave me compliments and liked it. 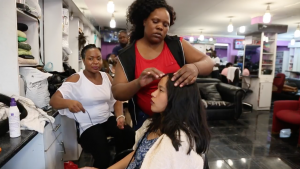 Ofcourse their is such as your own culture and having different habits from already over decades, for me the opening up and allowing is what is important at this moment.

I would like to know how your media in your country plays on stereotypes and if their are several texts/movies about this. I am up for any discussion!