Hello, this post concerns on the project I've been working on for the last 2 years, which has been constantly evolving media-wise.

"Frágil" is a material research based project. Looking into the simbolic and real possibilities of obsidian stones.
Obsidian has been used around the world with different pourposes from making sacrifical daggers, to mirrors, used today for artesanal crafts as well as for psicological therapy and ceremonial magick.
Black mirrors being the sacred item of mexica god Tezcatlipoca, which he used as a dimensional portal to look into other times and kill his enemies.
Black mirrors now are used in the same manner by both new age practices and ceremonial magick, to dwell into the inner self and to evoke entities into this plane.

Several actions I did manifest as ways to create fractures in a black mirror as a way to liberate energy, a parallel between human body and black mirrors as contained energy as a portal.

I started the research with foucault's concept of heterotopy as the most basic explanation of if is a metaphor I love: an Heterotopy is that which we can see but is not real as our reflection in a mirror, it also refers to the imaginary construct of an urban space, that which seem very real to us like subcultures, I think structures in itself are something we must fracture, they become structures of violence, we must liberate this contained energy so it becomes useful.

Now I'm doing ephemeral sculptures and researching on the sound aspect of obsidian, as I had an experience with an instrument called apache's tear, this is something you put on your bellybutton as a "therapy" to disable energy blocks on the body. What I felt was a vibration going thru from my belly button to my arms, to my legs, to my head, to which I thought there must be another way for this vibration to be experienced without the direct contact. As another peculiar aspect of the stone, artesans who work with it first start cutting with a tecnique called "percusion" on which they tap it until they find the most high-pitched sound, that is where they can make a clean cut, in this peculiarity I think theres another metaphor for liberation, when things get high-pitched or intense (that's a saying in spanish), it is possible to change the way things are. 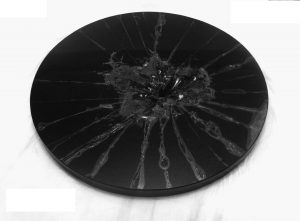