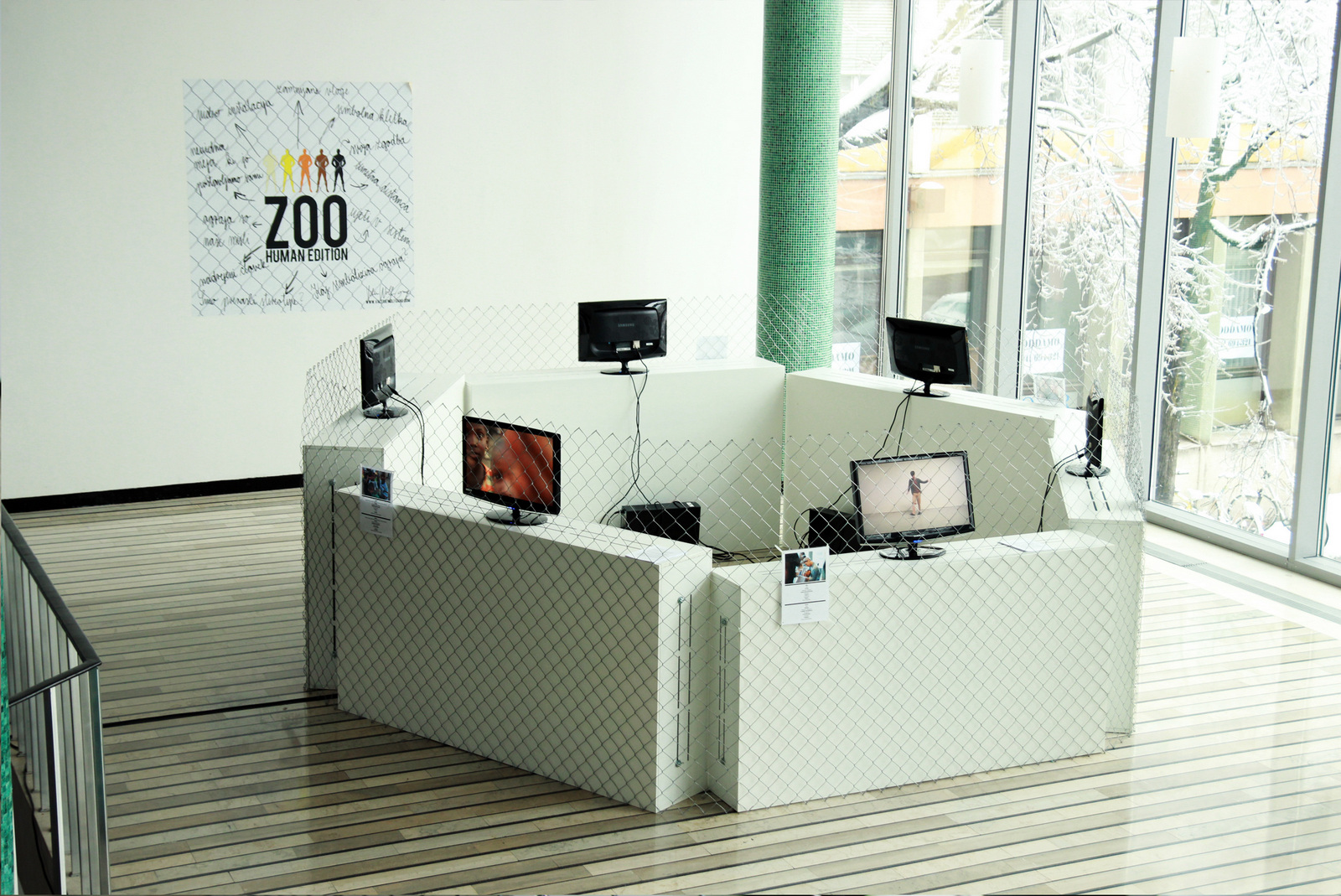 video instalation (variable), 2014
ZOO: HUMAN EDITION is a video installation which shows human species as a central entity through the reverse role. Video installation is constructed from six screens that are positioned in the center of the gallery space with their backs facing each other so they create a circle around which viewers can walk and watch six different clips. Wire fence is built around the screens, so we have to look at them through the fence. Each video was filmed in one piece without editing in real time with a static camera, so it symbolically indicates the space or "the cage" in which the human subject is located. In front of each video there is a plate on the fence, which has a photograph of the specimen in the video, in addition to the photographs there are written some basic information: name, origin, habitat and other characteristics - just like in a real zoo. The author of the video installation raises some questions to the public: what is the difference between man and animal, have we already outgrown stereotypes and racial prejudices, and what does a wire fence actually symbolizes, through which we look at the videos (or in fact ourselves). One of the meanings of the fence is certainly the invisible boundary which we create ourselves. In this way we create an artificial distance from a specific race, culture, country and the neighbors, and we place ourself in a position of a superior man - which is similar situation that we have towards animals. The fence also represents us being trapped in a system that we have created - like the artist also created this installation. Fence can also be our mind - we can look through the wire and se far or we can build it around us and hide. It is certainly important that the viewer is seeing this video installation with an open mind and create their own story that inspires them while watching.
Video installation and videos by Valerie Wolf Gang
Cast: Lana Erzin, Alex Škofljanec, Jalen Mint, Alphonce Joel, Tea Potokar, Val Makanjila Joel, Alex Hong, Jorge Gaspar, Filipe Rocha, Mariba, Alberto, Johne, Anita, Joao, Duarte, Teodoro, Maureo
Technical support: Kino Šiška & Urša Bonelli Potokar
favorite