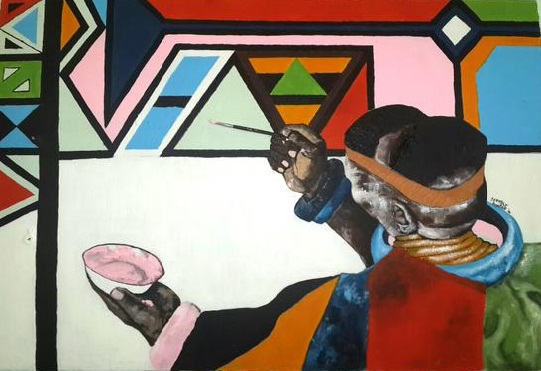 This is a follow up piece that answers the question I asked in
the FGM: Female Genital Mutilation (2014) about the tradition enforcing
degrading and derogatory notions created by men and use them to belittle
and dehumanization of women, in a form of "so-called traditions".
I created this piece to raise awareness that there are traditions that
can be empowering to women and in the Ndebele tribe (South Africa),
women learn and pass down the tradition of hut decorating using
traditional Ndebele geometric designs to younger generations of women,
and why I say that this tradition empowers women? Its because an Artist
called Ester Mahlangu, was invited by BMW and flown to Germany to
decorate the 5-series sedan of that era and she was commissioned for her
Artwork and I believe that with this kind of tradition, women can also
benefit and when women are empowered, the whole nation will thrive.
The title of the painting is abbreviated as A.R.T: Actual Realistic Tradition that empowers women.