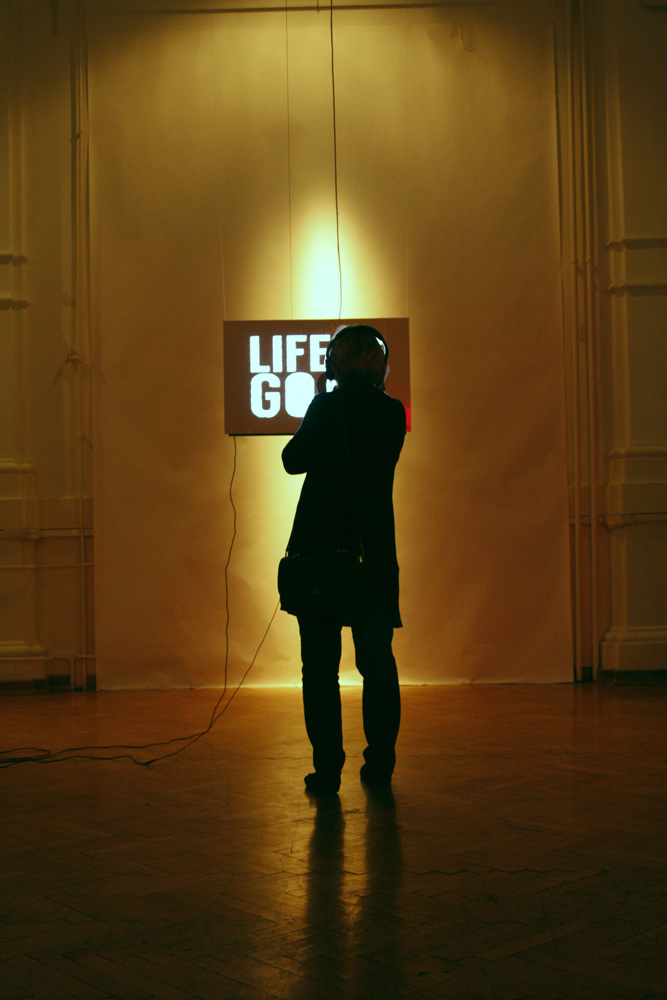 Life is good, especially when we realize how precious it is precisely because it is transient. This is the fundamental message behind the work of artist Valerie Wolf Gang, who is presented to us in this exhibition with a video installation titled (Sub)Conscious. The spatial installation comprises seven documentary video clips, which demonstrate the visual facet of our inhumaneness towards the world in which we live, and in which we entirely neglect the very same values that are supposed to be essential to our own existence. The conditionality of this statement reflects the artist’s questioning about whether such a thing, i.e. a positive shift in the awareness of humanistic values, is even possible anymore.The artist invites us into her original creative sphere by means of cut-out visual messages that cover the screen where she plays her installation video. In this way we are forced to see the recordings only “through the prism of” her own positive attitude; in a meta-static way, she thus attempts to imprint messages that are more than “just” words, into the subconscious part of our brain. Valerie Wolf Gang artfully guides us through her intimate view of the world, which is affirmative, and positive; the videos are accompanied by original poetry through which she reveals certain facts that are crucial for all who exist: to be born and to live, to learn and thereby unfold the essence of life.It was thus that the cut-out slogans were created: Life is good, through which we observe natural disaster videos, floods and fires, all of which are an everyday part of our lives; Enjoy the little things, and behind it a video on poverty and precarious work, i.e. work carried out in impossible conditions. Dream imagine believe is a visualization testifying to the violence that goes on in the streets, to the burglaries, fights, and protests pointing to global violence. The theme behind Make your dreams happen is Black Friday, when huge masses of people raid shopping malls for special price offers and discounts, it is concerned with consumerist hysteria in general. Relax is about industrial food production and factory farming, where animals are being massively raised and then slaughtered one after the other – to become food for all of us. Do more of what makes you happy is a documentary on human trafficking and illegal prostitution, while Worry less live more tells the story of our “hospitality” towards immigrants, which is only temporary or seeming, or is not there at all, pointing to our total lack of compassion and understanding of what “being different” stands for. The artist uses these positive signs to call attention to the mundaneness that we come across every day in mass media – on television, in the newspapers, on the radio and the internet. She unveils how the media blows thing out of proportion, which is an obvious consequence of capitalism and the information era; warns about the media war, which we have witnessed only a short time ago during the Balkan maelstrom. Inevitably, of course, she touches upon the subject of the present-day migrant explosion, which is causing fear and alarm among people, most of whom have never seen a single migrant person in their life, except on television, yet somehow they believe these people are malicious…The overload of negative information on social networks, the hostile hate speech inciting hatred, dissolving humanism and manipulating human emotions, therefore causes a negative propaganda, or, paraphrasing the words of the upcoming American presidential candidate: “Some bad PR going on here.” This propaganda creates a negative and unrealistic image in our subconscious. And the subconscious (or, in Freud’s terms, the unconscious) is a mental activity that strongly, if not crucially, affects a person’s behavior, whereby the trauma finally comes full circle.This time Valerie Wolf Gang, thank God, reverses the picture.