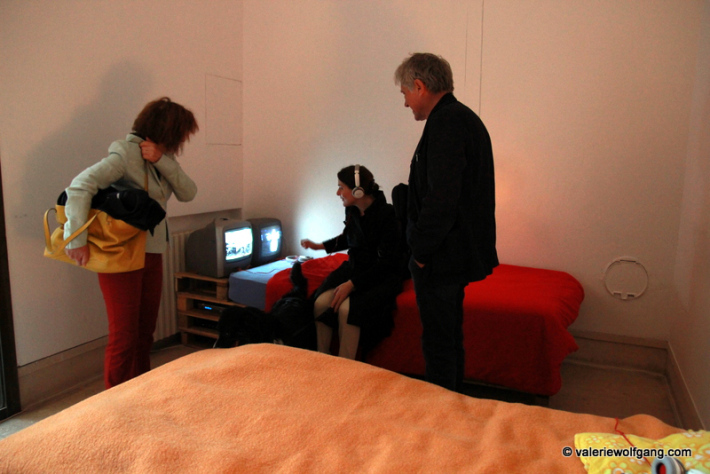 video instalation (variable), 2013
The concept of the exhibition is for the four individuals (the artists) to set multimedia ambiental installations in the gallery as if they were living there as flatmates (Slovenian: Cimri). They divided the gallery into seven rooms by their functionality and interpreted them each in their own artistic way. As in a real shared apartment, they had to make compromises (on set-ups, light etc.), fight for their space for individual installations or even rethink a specific exhibited work regarding the one next to it. They were literally living in the gallery for one week prior to the opening and became part of the whole installation. Valerie Wolf Gang exhibited various videos and video installations (such as: Political Recycling, Lucid dreams in a Mechanical World, In 10 years, Drink Coffee With Me in Venice, A look through the window, (Fe)male identity etc.), which were implemented in the space and became new installations in
different context and space.
Video installation: Valerie Wolf Gang, Pila Rusjan, Noemi Veberič Levovnik, Tomaž Burlin
Technical assistants: Urša Bonelli Potokar, Dejan Štefančič
exhibited: Gallery A+A (Slovenian Art Pavilion), Venice, Italy
favorite