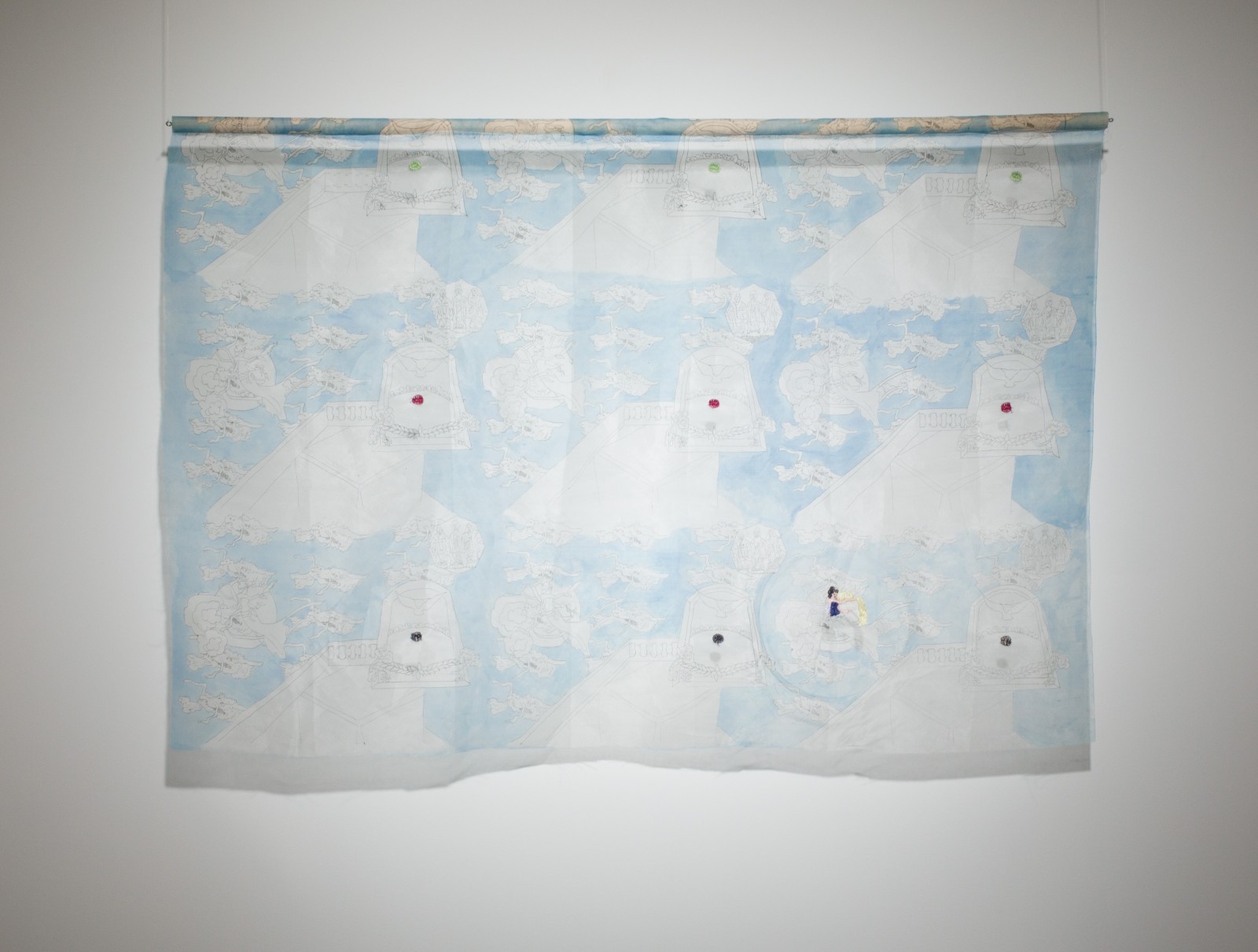 Frozen in rendered line, gods war amongst themselves above an architectural landscape found at Cheong Pyeong, high in the mountains east of Seoul. A female bodhisattva gestures at a peculiar trio of religious bodies emerging from a celestial portal, set against a background of dancing dragon heads. This scene cinematographically repeats itself over a length of silk, a medium which so closely resembles skin— that which drapes and enfolds body, mind, and memory. Like Second Skin, But Too Blue is one part of a larger body of work that contends with issues of memory situated in holy space that I once accepted but now repulse. The work projects a faint shadow, dancing upon the wall behind it. Roiling and rippling yet suspended within a narrow perimeter, the work’s movements evoke those inner turmoils which haunt the psyche.

The manner in which I interact with and interpret my surroundings through visual mediums has been profoundly influenced by my adolescent exposure to a cult. The Unification Church, is a Korean cult that practices mass arranged marriages, self-flagellation, and was recently led by Reverend Moon, a man who proclaimed himself to be the next Messiah. Towards the creation of this body of work, I received a fellowship and a grant to revisit their “Holy Shrine,” or the Cheong Pyeong Heaven and Earth Training Center in Gapyeong, Korea. There, I made rubbings, videos, photographs, and studied the religious ritual and daily pilgrimage which the pious enacted in order to ensure their passage to paradise. Afterwards, I went to Seoul to study the phenomenology of holy space in Korean Buddhist temples scattered within the cityspace. The bodhisattva patterned within the composition finds its origins on the carefully preserved wall of a temple perched on a mountainside, while the architectural brutalist landscape sources from Cheong Pyeong’s grounds.

The content and creation of the work derives from my newfound understanding of the interrelations between artistic praxis/religious practice, memory/affect, and Buddhist temple/syncretic cult rituals and icons. The project hopes to address my repressed past and render my memories into relic form so that I can meet my ghosts, and finally, accept them.