This artist is pending approval. 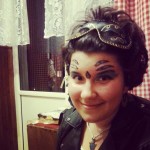 mopido
Location:
Cracow, Poland
School:
Jan Matejko Fine Arts Academy
Hello All
In my art I follow my deepest fears, fascinations, reflections and my book / travel knowledge. I read a lot of myths as a child and was utterly fascinated by fairytales, legends, music and such. Some of the projects link to that, others just connect with the place/trend/observation I would like to pass on to my viewers. So, here it is- about my projects and thoughts.


Floating/ Utopce
Paintings of Half Dead Half Human
Welcome, those who enter the void. Let the water in your lungs float with the water surrounding your body, close your eyes and just float on the river of your dreams, desires, fears and everything that makes you a living being.
Feel at ease.
You don't ever have to leave.


Creatures from Across the Sea
Oh, how we long to see those lands.
First-the totems. Meaning the inner animal, patron, essence of soul. So from chaos came bird woman, dragon lady and monster man. All of them contain the person (human) on the first plan, followed and fulfilled by the animal in the background.
Another idea hit me, so I started to create stereotypes of Aliens from across the sea. The way Europeans imagined citizens of Wonderland or devils.Now I am thinking I should follow the 'white devils' idea- how the Asian, American and African people consider us? It could be interesting. Going back to the path- first I constructed Parrot Man. His figure is like a costume, mask, he has no eyes (we're not able to see his soul,there is no information about it, we are not able to or not supposed to do so).Next came the Two Faced Woman. I also painted yellow witches, covered with hairs or with a skin like a fish. They were supposed to be scary and alien, gossiping during the witchcraft-making.
It is certainly not the end of the path.

The Social Witchcraft
Yes, we can see you.
Meetings seem to me as rituals- those grotesque faces shaped indemonic masks. All similar. And iI felt like a alien simply because looking on them. I usually feel this way- that there is a code I'm missing or something underneath it, second secret meaning.
I imagined creating paintings of witches-that's what most women are, or seem or feel to be-dancing, holding, rocking. That's the source of the first painting.
Then I remembered about this universal truth-all of the neighbors watch each other in secret, spy, gossip. Nothing can pass their notice. In smaller villages all over the world it can lead to some ugly business-like self-made trials. Because we -oh so- love to judge. And to punish the sinners, outsiders or those who piss us off. I shot some photos of neighborhood of my grandfather. I decided to recreate that kind of watching tension, combined with instant judging.
Another painting, the third, came out as I was processing the idea of dance and the potential that it has. What kind of powers can be awaken? Most of primal religion puts a lot of power in ritual dancing-for example shamans, voodoo priests and Indians.
Then I decided to focus of the Otherness. Solitude, hiding yourself in the mask, never to reveal your true substance, no matter what. How we can pass each other and never know our family, friends, ourselves. That how the 4th painting was created-creatures sitting together, waiting for abus, on a small station. We can't see their faces, we only can watch-like stalkers- some off their secrets slipping away from mystery into the daylight. One lady is a dragon, the other seems to be an underwater creature. The last manis a spook, scary monster, disgusting. They all have us fooled by everyday costumes they’re dressing. But which one is a mask and which is a facade? What should we believe into? Maybe we're missing some more layers of their substances? because every living thing is complicated piece of different roles melted into hybrid.
Next Artist >>