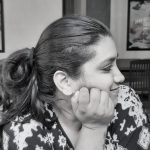 Antara Dey
Location:
Bangalore, India
Antara Dey (b - 1994) practices in varied mediums spanning drawing, painting, digitally rendered photographs. With approaches that concern ideas holding memory, folklore and archiving of family data , she reflects on the closely related subjects of identity and its barriers. This often results in an examination of both the human need for ‘conclusive’ stories and the question of whether anecdotes ‘fictionalise’ history and folklore.

By studying her community’s folklore, its ways and methods of ever-evolving, a process very close to her heart, she hopes to understand and focus on the cultural homogeneity - understand the sense of pride she has for her culture, and the common background she (may/may not) shares with her fellow Sylheti people, but at the same time ask questions pertaining to the dissemination and displacement of “their” culture too.

Currently Antara is working on something that is very close to her heart and is a vital part of her identity. While inquiring into the oral traditions, learning, reading and then researching the existing literature of Sylheti folklore documented in the “Sylheti Nagri” (Silôṭi Nagri) script, alongside the cultural artefacts, she wants to understand the reason behind her societal security or the sense of security that she derives from being a part of the cultural homogeneity, her confidence in the continuation of traditional patterns of language, custom, value with a lifestyle and standard of living of the 21st century.

It is a connection between telling the stories of her family (who still mention with pride, that they did not ‘migrate’ or take ‘refuge’ but just ‘moved to a better location to expand their business and opportunities') and her own experiences of ‘migrating’ or ‘relocating’ to different cities for her own share at better opportunities - only this connection is formed at a folklore level.

Her paintings establish a link between the concept’s reality and that imagined by its conceiver. Her works focus on concrete questions that determine our existence. She has been trying to push her boundaries using drawing, painting and digital media along with the use of vibrant colours, shapes, patterns to architectural spaces, their history and folklore, remnants of the spaces making them more evocative.

Her works focus on the inability of communication which is used to visualise reality, the attempt of dialogue, the dissonance between form and content and the dysfunctions of language. In short, the lack of clear references is a key element in the work. She has a strong symbolic influence on the hypothetical nature of concrete spaces in almost a fantasy-esque memory. We may be protected inside the concrete blocks of our homes; however, the consistent worldly conflicts keep on reaching us through all different media - papers, TV, and the Internet.

Her body of work called 'Steady State' work addresses the rigid spaces and its make, how it penetrates all parts of contemporary society - be it physically or mentally. With the use of loose yet geometric shapes and patterns as well as bold, vibrant colours, she tries to break the hypothetical and non-hypothetical 'concrete' spaces in a progression of the irregular graph.

She begins by breaking down spaces (albeit paintings,) into geometric patterns, formerly landscapes and portraits but more recently spaces neighbouring her childhood home, to make them look like the way she wanted them to, she breaks down the schools she went to, then on to blurred renditions of memories from the past - memories that she did not or could not paint a clear picture of, mentally or physically, but were always there subconsciously. Her id played a major role in creating her earlier pieces.

‘Steady State’ alongside a few other similar series was a part of the ‘#365dayschallenge’ project (2018-19) she did on social media. This was a self-funded project where she created one painting every single day for a year and uploaded them on her Instagram and Facebook pages – the project was a social experiment to not only determine things like virtual artist visibility, social media analysis on artwork concepts, etc. but to create a dialogue, between the art folks and the non-art folks that follow her page.

Her works are aesthetically resilient, thematically interrelated material for memory and projection. By contesting the division between the realm of memory and the realm of experience, she absorbs the tradition of remembrance into her daily art practice. Through her practice of creating drawings, paintings and digital creations, she wants to reveal the context marked with folklore and break down rigid cultural (concrete) practices, language, and identity.
<< Previous Artist  Next Artist >>